A version of this article was published in The Daily Record on January 6, 2015.

Peer review laws have been enacted in all 50 states. The intent of these laws is to improve the quality of health care by providing a system for health care institutions to evaluate the qualifications, competence and performance of health care providers. 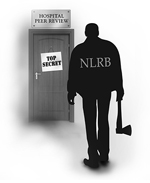 The confidentiality of peer review proceedings and records is a key aspect of most peer review laws, and, therefore, the peer review records are not subject to discovery in most lawsuits. A recent decision by a federal administrative law judge calls those safeguards into question.

In Midwest Division-- MMC, LLC d/b/a Menorah Medical Center v. National Nurses Organizing Committee, a union representing nurses at a hospital located in Overland Park, Kansas challenged various provisions of the hospital's peer review process. At the core of the dispute was an investigation by the hospital's Medication Diversion Prevention Committee. The committee summoned two nurses, both members of the union, to an investigatory meeting to address and be interviewed by the committee. The nurses were not informed about the nature of the charges against them beforehand.

Both nurses claimed that they asked to have a union representative attend the meeting with them. The hospital denied their requests citing the confidentiality provisions in the hospital's risk management plan, which provides that employees may only disclose information concerning committee proceedings to the committee, legal counsel for the hospital and applicable licensing agencies, unless otherwise authorized by specified hospital officials.

The hospital argued that it modeled the confidentiality rule on the Kansas peer review statute, which provides that all proceedings and records of peer review proceedings are privileged, not subject to discovery, and inadmissible as evidence in administrative or judicial proceedings.

B. The ALJ Decision

The union responded by filing an unfair labor practice charge with the National Labor Relations Board (NLRB). An NLRB Regional Director then issued a complaint which was heard by a federal Administrative Law Judge (ALJ). Amicus briefs supporting the hospital were submitted by the American Hospital Association and the Kansas and Texas hospital associations.

Preliminarily, the ALJ held that under NLRB precedent, "state confidentiality laws are not binding in NLRB proceedings." With respect to the union's requests for information, the ALJ noted that Section 8(a)(5) of the National Labor Relations Act (NLRA) requires an employer to provide a union with relevant information that is necessary for the proper performance of its duties as the employee's bargaining representative. Under the NLRA, information requests concerning employees' "terms and conditions of employment" are presumptively relevant.

The ALJ found that "the requested information is necessary for the union to effectively monitor and enforce the terms" of the union's collective bargaining agreement with the hospital. The information would allow the union to compare the incidents that cause nurses to become the subject of such investigations, and ensure that its members are not being unfairly targeted. The ALJ also held that the information would help the union determine whether to file a grievance on behalf of its members.

The ALJ next considered the hospital's confidentiality rule, which prohibits employees who are the target of peer review investigations from discussing the investigations outside the proceeding. Section 8(a)(1) of the NLRA provides that it is an unfair labor practice for an employer to interfere with an employee's rights under the act, including the right to engage in "concerted activities" with other employees. The NLRB has long held that "concerted activities" encompasses the right of employees to discuss amongst each other events affecting the terms and conditions of their employment.

To justify a restraint on such discussions, an employer must have a legitimate business justification. The hospital argued that the rule was justified because Kansas law requires that peer review proceedings be kept confidential. The ALJ rejected this argument and noted that the Kansas law does not specifically prohibit investigation targets from discussing the investigation with others. The ALJ also found that the hospital had failed to show that it could not protect the integrity of the investigation, or that patient care would be compromised, without the overbroad rule.

Finally, the ALJ held that the rule barring union representation at investigatory meetings also violated the NLRA. Nearly 40 years ago in NLRB v. J. Weingarten, Inc., the U.S. Supreme Court ruled that an employee has a right to union representation in an investigatory interview which the employee reasonably believes might result in disciplinary action. The ALJ found that the Medication Diversion Prevention Committee interview of the nurses was such a meeting. Moreover, the ALJ noted that the Kansas law did not specifically prohibit the nurses from having representation in peer review proceedings.

The hospital has appealed the ALJ?s decision to the NLRB. If the NLRB affirms the decision, the hospital may appeal to the United States Court of Appeals for the Tenth Circuit, which has jurisdiction over Kansas.

The Obama administration NLRB has sought to expand its reach to many areas beyond traditional labor-management relations, such as challenging restrictions in employer social media policies and electronic communications policies. Although the Menorah Medical Center decision presently is applicable only to the Kansas hospital, the case may signal the NLRB?s intention to begin challenging the rules governing similar proceedings at other health care institutions.

Although currently only union members enjoy the so-called Wiengarten rights to have
a representative present at meetings where discipline may result, in 2000, the Clinton administration NLRB expanded these rights to employees at non-unionized workplaces. The Bush administration NLRB subsequently reversed that ruling, and again limited Weingarten rights to union workplaces. The current NLRB could try once again to expand Wiengarten to all employees.

Since the NLRA protects the right to engage in concerted activities by most non-governmental employees, not just those represented by a union, the outcome of this case could have implications for peer review and discipline procedures at all health care facilities