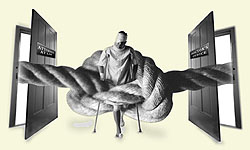 Most Wisconsin health care providers are required to carry $1,000,000 in medical malpractice liability insurance. In addition, Wisconsin has established a Patients Compensation Fund to provide liability coverage above that threshold.
A. Unequal Treatment
In Ferndon, the Wisconsin Supreme Court observed that the damages cap treated medical malpractice victims who suffer more than $350,000 in non-economic damages differently than victims who suffer less than $350,000 of such damages. The former receive only part of their damages, while less severely injured victims receive full compensation. As a consequence, younger claimants with serious injuries, who are likely to suffer from the effects of their injuries for many decades, are more likely to be undercompensated than are older malpractice victims with shorter life expectancies.
Under Wisconsin law, the cap must also be shared by all claimants who suffer compensable losses as the result of an act of medical negligence. Therefore, patients who are married or who have children may have to share their $350,000 award with a spouse and children, while an injured patient who is single and childless may recover the entire $350,000.
B. Countervailing Objectives
The court in Ferndon considered whether there were sufficient reasons to justify this unequal treatment of people on the basis of youth or the number of people in their families.
First, the court determined that it was not reasonable to conclude that the $350,000 cap reduced medical malpractice insurance premiums. To the contrary, a United States General Accounting Office study found no definitive correlation between caps on non-economic damages and lower medical malpractice premium rates. Also, information derived from Wisconsin's Office of Medical Mediation Panels revealed that relatively few medical malpractice claims filed in that state resulted in substantial verdicts.
The court also concluded that the $350,000 non-economic damages cap was not rationally related either to keeping the Wisconsin Patient's Compensation Fund's annual assessments to health care providers at a low rate, or to enabling the Fund to operate on a sound financial basis. In fact, the court noted that fund assessments had actually been decreasing over the years. Moreover, the Fund had been fiscally sound and had flourished since its inception in 1975, even during periods when there was no cap.
The court then rejected the contention that lowering health insurance premiums would lower overall health care costs as those savings were passed on to patients. It cited studies that found that medical malpractice premiums account for less than one percent of total health care costs. Therefore, even if the cap reduced medical malpractice insurance premiums, there was no evidence that that reduction would have any appreciable effect on consumers' health care costs.
The court also found no evidentiary support for the proposition that a cap on non-economic damages creates an environment in which health care providers are more likely to move into, or less likely to move out of, Wisconsin. According to the court, the available evidence instead indicated that health care providers do not decide to practice in a particular state based on that state's cap on non-economic damages.
Finally, the court addressed the issue of defensive medicine. That practice occurs when doctors order expensive, although unnecessary, tests so that they may defend themselves in malpractice cases by saying that they did everything possible for the patient. The court also rejected this contention, relying on government studies that found that defensive medicine cannot be measured accurately, and does not contribute significantly to the cost of overall health care.

C. Life After Ferndon
The Ferndon case may not prove to be the death knell for damages caps in Wisconsin. Two of the justices who joined the majority in striking down the cap issued a separate opinion emphasizing that medical malpractice caps can be constitutional. However, they could find no rational justification for setting the Wisconsin cap at $350,000, a figure that appeared to have been "plucked out of thin air." Therefore, their concurring opinion leaves open the possibility that a majority of the Wisconsin Supreme Court would vote to uphold the constitutionality of a larger cap on non-economic damages.
D. Maryland Cap
In Maryland, non-economic damages are capped in all personal injury cases, not just cases alleging medical malpractice. However, since December of 2004, the cap applicable to medical malpractice cases is now different than the cap applicable to other personal injury cases. Specifically, non-economic damages in medical malpractice cases involving non-fatal injuries are capped at $650,000 for claims that arise between January 1, 2005 and December 31, 2008. Beginning in 2009, the malpractice cap will be indexed for inflation. Further, unlike Wisconsin, the Maryland malpractice cap is now 25% larger in wrongful death cases in which there are two or more claimants or beneficiaries.
In 1992, Maryland's highest court held that the State's cap on non-economic damages is constitutional. It concluded that the cap was rationally related to the goal of assuring the availability of sufficient liability insurance at a reasonable cost to potential tort defendants to cover personal injury claims. Therefore, while the decision in Ferndon might encourage some enterprising lawyer to ask Maryland's highest court to reconsider its 1992 decision, for now Maryland's cap is securely in place.
Thomas X. Glancy, Jr