What Are Those Pilgrims Up To Now? 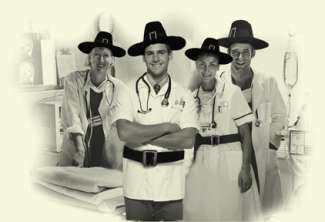 Massachusetts' goal is to cover between 90% and 95% of the State's medically uninsured over the next three years. To do so, the State will use a multi-pronged approach. The framework includes a State income tax driven individual mandate, expansion of the State's Medicaid Program, subsidized insurance products, mandatory employer contributions, and insurance reform.

Effective July 1, 2007, all Massachusetts residents over the age of 18 are required to have health insurance, and must indicate this coverage on their 2007 State income tax returns. Failure to do so will result in the loss of an individual's personal income tax exemption for State tax purposes, unless the State cannot match the individual with an "affordable" health insurance policy. Additional State tax penalties will be assessed in 2008, if the individual continues to ignore the mandate.

Increased Medicaid reimbursement levels for hospitals and physicians will also be implemented over a three year period. However, these increases will be tied to the provider attaining certain quality standards and performance benchmarks. Consumers will also be able to compare health care costs and quality information via a new web site.

A new quasi-independent authority, the Commonwealth Health Insurance Connector, will link individuals and employers with 50 or fewer employees to affordable health insurance products.

The Connector will also administer a program that will provide subsidies to adults who are not eligible for the State's Medicaid Program, but whose incomes are below 300% of the FPL. The subsidies will be based on a sliding scale based on household income, and will be used to obtain health insurance coverage.

Remarkably, these subsidies will be funded in part by the federal government. As a vestige of Massachusetts' now dismantled hospital rate setting system, $385 million of federal Medicaid money has been contributed annually to the State's $1 billion per year uncompensated hospital care pool. That federal contribution was slated for extinction, but will now be continued, albeit diverted to health insurance premium subsidies.

In addition, an employer that does not make a fair share contribution may be subject to a "free rider surcharge." The surcharge is triggered when there are multiple uses of free care by employees of such an employer. The charge to the employer ranges from 10% to 45% of the amount paid by the State for services provided to the employer's personnel through existing Massachusetts uncompensated care and medical safety net programs.

It is possible that some or all of the employer contribution aspects of the Massachusetts reform plan violate federal employment law, but the resolution of that issue will have to await judicial review.

The plan also requires the merger of the small group markets and the individual health insurance markets in Massachusetts. In addition, young adults will be allowed to remain on their parents' policies for two years after their loss of dependent status or until they reach the age of 25.

The State also put a freeze on any new mandated health insurance benefits until January 1, 2008, and will permit additional "rating factors" in writing insurance policies, such as tobacco usage and wellness programs.

Whether the goal to cover more than 500,000 of the State's uninsured will be met in three years remains to be seen, but Massachusetts has unquestionably moved forward daringly with a creative approach to the problem of the medically uninsured.