Nevertheless, Maryland's highest appellate court recently provided a road map for interested parties to second-guess certain decisions made by designated health care
agents. In In re Foley, the court allowed a medical examination to proceed, against the
wishes of a designated health care agent. In addition, the court held that court-ordered medical examinations cannot be appealed, and therefore cannot be challenged once ordered. 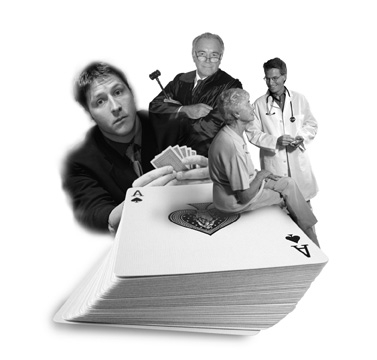 A. The Facts
Sophia Foley was a sixty-two year old woman, suffering from dementia. Prior to her incapacity, she had executed a health care power of attorney, designating her husband, Michael, as her health care agent. As such, Michael made all of Sophia's health care decisions.

Sophia's sister, Eugenia, believed that Sophia should be tested for Lyme disease, which disease may have been the cause of Sophia's dementia. Michael had Sophia tested, but the tests indicated that Sophia was not infected with Lyme disease.

Eugenia remained unsatisfied, and she brought suit against Michael for joint guardianship of Sophia. She also asked the court to order a different, more extensive examination for Lyme disease. Although Michael and one of Sophia's treating doctors objected, the court ordered the examination, and Michael appealed the decision.

B. End Run
Prior to this case, it was generally believed that a decision of a health care agent could
only be overturned by a court if it violated the provisions of the Maryland Health Care
Decision Act (HCDA).

The HCDA allows a decision by a health care agent to be overturned only if the decision runs contrary to (1) the wishes of the patient, as expressed in the advance directive giving the agent decision-making power, or (2) the best interest of the patient, as defined by the statute.

Michael's decision to forego the second Lyme disease exam was overturned by the trial court, and that decision was upheld by Maryland's highest court, not because Eugenia convinced anyone that the test was in Sophia's best interest, but because Eugenia found away to make an "end run" around the HCDA.

Eugenia's request for a court-ordered Lyme disease exam was the result of a novel use of a procedural rule that permits a judge to order physical and mental exams in civil cases, where the medical condition of a party to the litigation is "in controversy." For example, it is quite common to order such an examination in an automobile injury case. In this situation, Eugenia argued that Sophia's condition was an essential aspect of determining Michael's fitness to serve as Sophia's sole guardian.

C. No Right of Appeal
Not only did Maryland's highest court decide that Maryland's civil procedure rules can be used to "trump" a health care agent's decision to forego a medical examination, but the court went farther and held that once ordered, the lower court decision is not immediately appealable.

Michael argued that an order for a medical examination should be such an exception. He reasoned that in practical terms the order to go forward with the medical test will be unreviewable at the end of the case since by then Sophia would have already been
examined. However, the Court of Appeals rejected this argument, because it did not believe that Sophia's situation was "extraordinary" enough to permit an immediate appeal.

Second, the discovery rules in all likelihood cannot be used to order a particularly invasive medical examination. Although there is no law in Maryland on this point, other jurisdictions have not allowed their civil procedure rules to require parties to submit to risky medical examinations.

It also appears that the road map has led its first traveler down a very long road. Three years after Eugenia filed suit, and as of the date of this writing which is six months after
Maryland's highest court decided the case, the parties are still wrangling, and Sophia is yet to be tested.