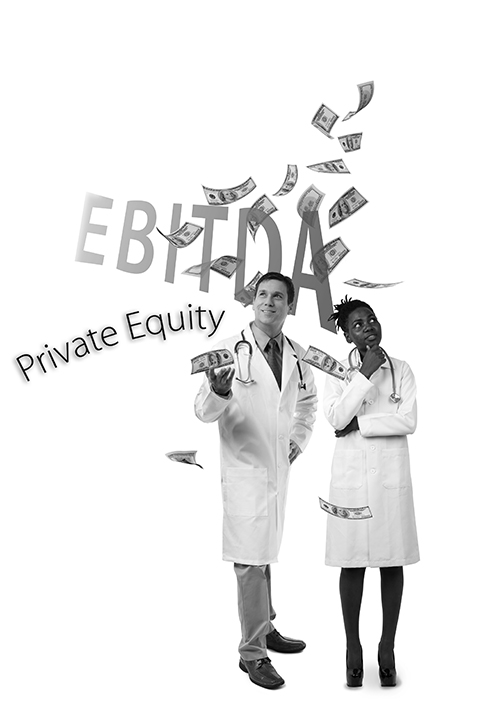 Prior to the COVID-19 crisis, physicians were selling their practices to private equity companies at an ever-increasing pace. While those acquisitions have slowed, the pace will likely quicken as health care begins to normalize. Accordingly, it is important for physicians to understand the reasons, elements and pros and cons of such transactions.

The reason private equity firms are attracted to physicians is because money attracts money. There are 78 million baby boomers, representing one-third of the U.S. population. In their early 70s, these baby boomers are consuming great amounts of health care services, and even more so as they reach their 80s.

Within this context, health care spending accounts for nearly 20% of the U.S. gross domestic product, and will soon exceed $4 trillion annually. Moreover, spending on physician services is the second largest category of health care spending. Not only are tremendous amounts of money coursing through the health care system, but physician practices are willing acquisition targets. The market is fragmented, meaning many relatively small physician-owned practices have not yet been consolidated. Moreover, those practices are often owned by baby boomers looking for exit strategies.

Further, physicians coming out of residency or fellowship are less willing, and less typical for them, to own their own practices, meaning there is a population of physicians who in the future can staff physician practices owned by private equity companies.

In 2017, there were $15 billion in private equity physician health care deals.  In 2018, the number increased to $22.3 billion, and in 2019, more than $60 billion of such health care deals. The first wave of private equity targets included orthopaedics, dermatology, urology and gastroenterology. The second wave included ophthalmology, pain medicine, radiology, anesthesiology and emergency medicine.

However, the third wave included everyone else, from women’s health and podiatry to ENT and oncology, and from general surgery and internal medicine to behavioral health and primary care. Over time, it is questionable whether some of the lower margin physician practices, such as primary care, will remain private equity targets, but they may.

While all physician acquisitions are different, a target practice will usually have about a dozen physicians, and two to four sites, with at least $5 million to $10 million in earnings before interest, taxes, depreciation and amortization (EBITDA).

When determining the price of an acquisition, it is often helpful to categorize a target practice either as a “platform” or a “tuck-in.”  The first or second practice acquired by a private equity firm in a particular specialty is often considered the platform for further acquisitions, while subsequent acquisitions, or tuck-ins, are then “bolted” onto the platform.

The private equity firm focuses on the profit and loss statement of the target practice and projects EBITDA going forward after “normalizing” the target practice’s past performance. In that regard, excess or below market rent or other above market fees paid to owners are reset at market rates. Personal travel and entertainment and other aggressive expenses paid by the practice on behalf of its owners are also eliminated. One-time expenses or profits are eliminated as well.

Such amounts often result in owners being offered perhaps a 30% decrease in their compensation, or the owners moving forward with being paid at 30% to 35% of the revenue they generate off their own backs. In this latter regard, owners may have previously been taking home the profits from ancillaries, or the profits generated by employed physicians, but going forward those former owners will likely only be paid for the revenue they generate by touching patients.

Further, the lower pay being offered to owners to continue working for the private equity acquired practice will be coupled with stringent non-compete provisions, preventing the owners from selling their practice on one day and then competing with the practice on the next day.

Once physician revenue stabilizes after the COVID-19 crisis, all of the environmental  factors, such as money attracting money and market fragmentation, will still exist, and, therefore, the volume of private equity physician acquisition deals in the future will remain significant.