Federal legislation, known as ERISA, protects participants in pension plans through a number of safeguards, including minimum funding and vesting requirements, insuring of plan benefits, reporting and disclosure requirements, and the imposition of fiduciary responsibilities. However, Congress also exempted certain types of plans from ERISA’s requirements, such as plans established by federal, state, local or tribal governments, as well as “church plans.” 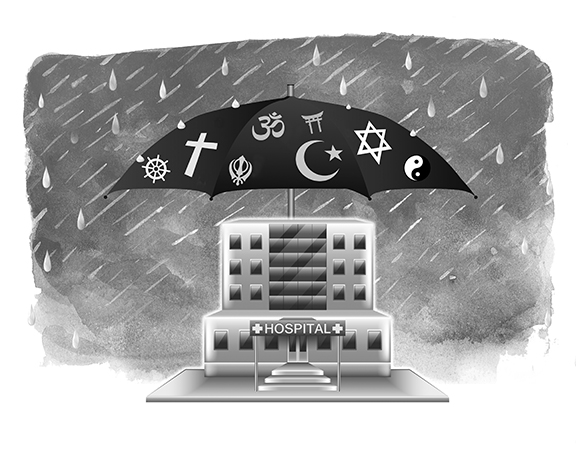 At issue in the U. S. Supreme Court case of Stapleton v. Advocate Health was whether a plan established by a church-affiliated hospital (not by a church itself) qualifies as a “church plan” exempt from ERISA.

Advocate Health Care Network (AHCN) is a health system operating 12 hospitals and more than 250 other inpatient and outpatient facilities in Illinois. AHCN employs approximately 33,000 individuals, and has annual revenue of $4.6 billion.

Former and current employees of AHCN alleged that AHCN’s pension plan did not fall within ERISA’s church plan exemption, and thus was subject to the law’s numerous requirements. Of particular importance, they alleged that AHCN breached its fiduciary duty and harmed participants by failing to fund the plan at levels required by ERISA. AHCN did not fund, insure, or administer the plan in compliance with the requirements of ERISA because it had relied on the church plan exemption.

The controversy was part of a four-year wave of litigation involving more than two dozen religiously affiliated hospitals, which together comprise a pension funding shortfall of approximately $4 billion. Several lower courts handling these cases, including the federal court for Maryland, have ruled that plans established by church-affiliated agencies may qualify for the ERISA church plan exemption. Other lower courts have sided with employees, deciding that, although religiously affiliated organizations could maintain an exempt church plan, an exempt church plan must have been established by a church.

B. The Supreme Court’s Unanimous Decision

In a unanimous decision, the Supreme Court held that a plan maintained by a religiously affiliated organization qualifies as a church plan, regardless of who established it.

While Justice Sonia Sotomayor agreed with that conclusion, she expressed concern about its implications, stating that the Court may be denying ERISA protections to “scores of employees” who work for employers that “look and operate much like secular businesses.”

The Court’s decision means that religiously affiliated hospitals like AHCN may be able to avoid funding their plans in accordance with ERISA’s minimum standards.

Future litigation will likely focus on whether institutions are sufficiently controlled by or affiliated with a church. It is expected that these inquiries will center on hospitals’ governance structures and the make-up of plans’ internal benefit committees.

The Court’s decision could also have important ramifications under ERISA preemption rules, rules which prevent states from enforcing laws that contradict ERISA. For example, since ERISA preemption is not available for plans exempt from ERISA, states could respond to the Court’s decision in Stapleton by passing legislation allowing participants in church plans to bring suits in state court based on underfunding or fiduciary breach.

A version of this article was published by The Daily Record on May 29, 2018.