On October 10, 2006, two new Stark law exceptions and two new Anti-Kickback Statute (AKS) safe harbors went into effect. One exception and one safe harbor pertain to electronic health record (EHR) technology, and the other exception and safe harbor pertain to e-prescribing technology.
Taken together or separately, these new regulations permit hospitals to "give" EHR technology and/or e-prescribing technology to doctors without violating the federal Stark law or AKS.
Exceptions and safe harbors from the Stark law and the AKS are needed because these federal referral laws generally prohibit hospitals from giving anything of value to doctors who refer patients to those hospitals, unless the arrangements are specifically carved out of the prohibitions. 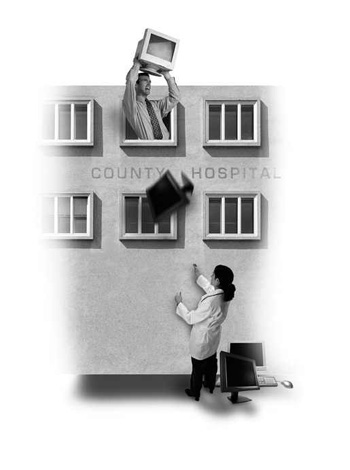 Curiously, the EHR regulations are only in effect through December 31, 2013, while no comparable sunset provision affects the e-prescribing regulations. Therefore, hospitals need to know that they only have a 7-year window to use the new EHR regulations.
A. EHR Technology
The October 10, 2006 version of the final EHR regulations are a vast improvement over the versions that had been previously proposed. Not only have many unworkable aspects of the proposed regulations been dropped, but certain noteworthy new requirements have been added.
First, a physician is now required to pay at least 15% of the hospital's cost for the EHR software. Eighty-five percent of the cost of internet connectivity, maintenance services and training may also be subsidized by the hospital. However, EHR hardware, such as computers servers and routers, may not be subsidized.
Second, the EHR technology must be "predominantly" used for electronic health records purposes, but the EHR technology may now also include billing, scheduling and other functions.
Third, the EHR technology must now either include e-prescribing software or be compatible with the physician's existing e-prescribing software, if any.
Like the proposed rule, the final rule still states that the subsidy may not be used to replace existing, functionally equivalent EHR technology. Although this may penalize physicians that have previously purchased their own EHR technology, the new EHR regulations do permit hospitals to subsidize 85% of the cost of upgrades, enhancements, or increases in functionality.
The arrangement between the doctor and the hospital must also be made pursuant to a signed, written agreement that is not tied to the volume or value of patient referrals. Moreover, that agreement must permit physicians to use the EHR technology with regard to any patient, and not just patients referred to the donating hospital.
B. E-Prescribing Regulations
A separate exception and safe harbor also simultaneously went into effect that only pertains to e-prescribing technology. While this other regulation covers both the cost of software and hardware, does not require a 15% contribution by the doctor, and does not sunset in 2013, this separate exception and safe harbor only pertains to systems that handle e-prescribing exclusively.
While the e-prescribing regulations are more liberal than the EHR regulations, the e-prescribing regulations will not likely be used as frequently because doctors will not want to utilize one computer system for e-prescribing and a different system for all of their other computer needs.
C. Lurking IRS Problem
Although the new EHR and e-prescribing regulations will insulate tax-exempt hospitals from federal referral regulators if the hospitals "give" permitted EHR or e-prescribing technology to affiliated doctors, there is yet no guaranty that the Internal Revenue Service (IRS) will similarly look the other way. The IRS may at some time offer guidance as to whether tax exempt hospitals may follow the new regulations without running afoul of the IRS' prohibition against tax exempt hospitals allowing their profits to inure to the benefit of private individuals.
Hopefully, the IRS will endorse the new regulations, provided that there is a clear public benefit associated with the doctors' use of the technology. However, until that guidance is issued, a certain risk will be lurking behind any tax-exempt hospital that implements a technology program in compliance with the new regulations.
D. Due Diligence
Hospitals that want to take advantage of the new EHR regulations as a way to enhance the quality of patient care and to reduce health care costs will have to act diligently, since the window of opportunity for the EHR regulations is presently scheduled to end on December 31, 2013.