Malpractice Subsidy Better for Some than Others

In December of 2004, the Maryland General Assembly enacted legislation aimed at relieving physicians and certified mid-wives from the spiraling costs of professional liability insurance. However, that legislation may be working better for some physicians and mid-wives than others. To better explore this premise, this article will first explain the mechanics of the subsidy, and then look at two hypothetical physicians, Dr. Ordinary and Dr. Careful.
A. The 2005 and 2006 Subsidies 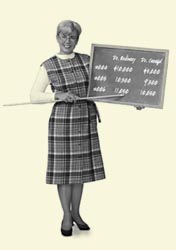