A version of this article was published by The Daily Record on June 8, 2016. 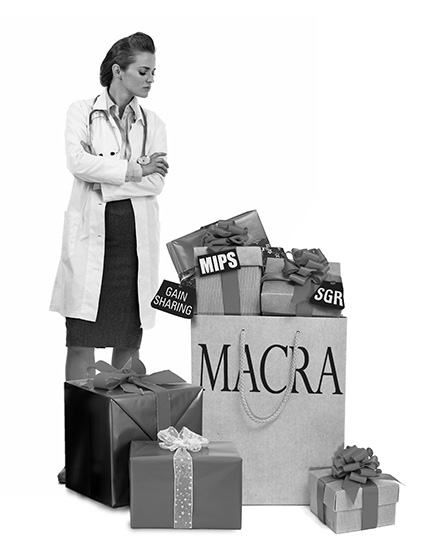 Additionally, MACRA opens the door to paying physicians to choose less expensive treatment modalities covered by Medicare (commonly known as "gainsharing") as long as the inducements do not limit or reduce "medically necessary" services.

A. Repeal of the SGR Formula

The statutory SGR formula was intended to maintain equilibrium between Medicare physician expenditures and, among other factors, growth in the per capita amount of the gross domestic product. In short, if the economy slows, Medicare payments to physicians were also to slow. However, since 2002, expenditures have exceeded SGR targets, thus triggering automatic reductions in rates under the Medicare physician fee schedule, which reductions Congress has repeatedly blocked.

MACRA was ushered in just in time to avoid an SGR generated 21 percent cut in Medicare physician payments in 2015. MACRA replaces the SGR formula with stable Medicare physician fee schedule updates, and beginning in 2019, payment adjustments through the new MIPS program, and eventually, payment increases based on participation in alternative payment models.

The updates to the Medicare physician fee schedule as of July 1, 2015, are as follows:

Current Medicare physician incentive programs, including the Electronic Health Record Meaningful Use Incentive Program, the Physician Quality Reporting System, and the Value-Based Modifier, will sunset at the end of 2018, in favor of the new MIPS program. The MIPS will judge performance based on quality, resource use, clinical practice improvement activities and meaningful use of certified EHR technology.

In addition, beginning in 2019, eligible professionals can receive further incentive payments when alternative payment models, such as accountable care organizations, produce at least 25 percent of their Medicare revenue.

The Civil Monetary Penalties Act (CMP) makes it illegal to pay a physician not to provide services to a Medicare beneficiary.

However, the Office of the Inspector General of the Department of Health and Human Services (the OIG) has used Advisory Opinions to approve particular gainsharing arrangements in certain situations. The OIG believes that gainsharing, in specific arrangements, is beneficial, particularly when the limitation or reduction in services is tied to services that are not medically necessary.

MACRA inserts the words "medically necessary" into the CMP. Thus, inducements (meaning paying doctors or sharing cost savings with doctors) for limitations and reductions of services provided to Medicare beneficiaries are now outside the bounds of the CMP, and are, therefore, permitted, when they are tied to services that are not medically necessary and thus promote efficiency.