Do you remember Monty Hall's television game show "Let's Make a Deal?" A contestant was shown several doors, and was told that behind one of the doors was a grand prize. The contestant anxiously selected a door, and the always smiling Hall opened the door revealing either a goat (or other barnyard animal) or the grand prize. 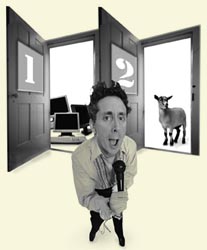 If you are a hospital and you want to improve the delivery of health care by giving your referring doctors the latest health information technology free of charge, the federal government is about to offer you a Monty Hall opportunity. Door #1 holds proposed rules for giving those doctors e-prescribing capabilities, while Door #2 holds proposed rules for giving them electronic health records technology.
Unlike Monty Hall, who did not let the contestants peek behind the doors before choosing, the Department of Health and Human Services (HHS) will permit providers to see behind each door before a final Anti-Kickback Statute Safe Harbor and final Stark Law Exceptions are promulgated, on a yet-to-be-determined date.
A. Statutory Background
Before we look behind each door, it is important to ask: why do we need these Safe Harbors and Exceptions in the first place?
The federal Anti-Kickback Statute prohibits payments that induce referrals of services or benefits that are paid by a federally funded health care program. Compliance with an Anti-Kickback Safe Harbor insulates a provider from prosecution under the Anti-Kickback Statute. (Noncompliance with an Anti-Kickback Safe Harbor, however, does not necessarily mean that that health care provider has violated the Anti-Kickback Statute.)
The federal Stark Law prohibits a physician from making referrals for certain designated health services payable by the federal government to an entity with which he or she has a financial relationship, unless an exception applies. Unlike an Anti-Kickback Safe Harbor, noncompliance with an Exception is a violation of the Stark Law.
Federal regulators are crafting Safe Harbors and Exceptions to these laws to promote e- prescribing and the use of electronic, as opposed to paper, medical records, because the regulators believe that such advancements will improve the quality and efficiency of health care services.
B. E-Prescribing

Behind Door #1 is the proposed E-prescribing Anti-Kickback Statute Safe Harbor and Stark Law Exception. The proposed E-prescribing Safe Harbor permits "Donors," a term that includes hospitals, group practices, prescription plan sponsors, and Medicare Advantage organizations, to provide their physician staffs, group practice members and physician employees, network pharmacists, or prescribing health care professionals with necessary computer hardware, software, information technology items, and services used solely for transmitting electronic prescription drug information. The proposed E-prescribing Stark Law exception permits Donors to provide this same technology to physicians.
So, what does "necessary" mean? The rules state that hardware, software, broadband or wireless connectivity and training services are "necessary," unless those items are the functional equivalent to a prescription system that a recipient currently possesses.
For example, if a Donor gives a desktop computer electronic prescription system to a physician who already possesses such a desktop system, the transfer would not qualify for either the Safe Harbor or the Exception, because the physician possess a functional equivalent. In contrast, giving a handheld electronic prescription system to that same physician would probably fall within the proposed Safe Harbor and Exception, because the handheld system would permit the physician to make mobile electronic prescriptions.
What does "solely" mean? The proposed Safe Harbor and Exception would not permit Donors to provide bundled software or hardware that would be used for non-e-prescribing. Thus, what lurks behind Door #1 may really be a goat. Why would a physician want two separate broadband connections, a stand-alone computer used solely for prescribing, or carry two wireless handhelds, one for general physician use and one provided by a Donor used solely for prescribing?
Nevertheless, the final E-prescribing rule may have a grand prize after all. Hopefully, the final rule will permit Donors to bundle other necessary software and give physicians multi-function use hardware, as long as the item and internet connectivity provided to the recipient is substantially used for electronic prescribing.
C. Electronic Health Records
Behind Door #2 is the proposed electronic health record (EHR) Stark Law Exception that would permit a Donor to transfer EHR hardware, software, and training to physicians. Door #2 also contains an announcement that an Anti-Kickback Safe Harbor might be forthcoming that also permits transfers of EHR technology.
Door #2 is significantly more complex than Door #1, and may also actually hide a goat. First, it is quite possible that the final Anti-Kickback Safe Harbor for EHR will be dissimilar to the Stark Law Exception. Physicians and hospitals would then be left with the awkward scenario of trying to meet two dissimilar regulations.
Unfortunately, the EHR Rule is further complicated by an April 27, 2004 Executive Order, in which President Bush directed the Secretary of HHS to develop certain standards for EHR, which Standards have not yet been issued. If a Donor gives EHR technology before the EHR Standards are issued, the proposed Stark Exception would not permit a Donor to bundle EHR technology with any billing, scheduling or other office management software. Also, EHR technology given by a Donor may not restrict or limit operations with other EHR and E-prescribing technology.
Hopefully, the final EHR Rule will arrive after the release of the EHR Standards, and will allow Donors to give EHR technology with billing and scheduling interoperability functions to physicians.
D. Conclusion
You may remember that the "Let's Make a Deal" contestants were chosen to play by dressing up in outlandish outfits that caught Monty Hall's attention. However, based on the state of the proposed Anti-Kickback Safe Harbor and Stark Law Exceptions regarding e-prescribing and EHR, it is premature for doctors and hospitals to don their costumes at the present time.