Is It Time for an Injured Patients' Compensation Commission?

Recent medical malpractice reform initiatives in Maryland have targeted certain high cost issues, such as lowering Maryland's existing cap on awards for pain and suffering.  Although these "reforms" were not enacted in 2004, even if they had been, the result may have only been a marginal lowering of malpractice premium costs.
Perhaps it is time to consider a more fundamental type of reform, such as a "no-fault" concept, akin to the workers' compensation system.
Presently, if an employee is injured on the job, he or she may not sue his or her employer for negligence.  Instead, the employee is entitled to be compensated, simply because he or she was injured in the course of employment, not because the employer was negligent by creating an unsafe work environment.  In return for not having to prove that the employer was at fault, the employee's recovery of damages is lessened, because the employee is compensated according to a schedule pre-determined by Workers' Compensation Commission. 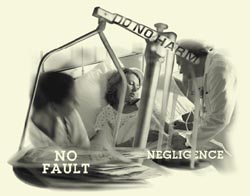 The process for compensating injured patients could be similar.  First and foremost, an injured patient would be entitled to compensation, without having to show that anyone was negligent, but only having to show that a medical provider made the patient's condition worse.
This is not the present situation.  To recover damages today, a patient needs to show more than just that he or she has been injured.  The patient must also show that the injury was the result of a health care professional failing to perform his or her job according to community standards.  Many medical injuries, therefore result in no recovery, because the provider, in fact, exercised due care, albeit the injury occurred anyway.
A.  A Newly Created PCC
The trade-off for patients no longer needing to prove a health care provider's negligence, would be a lessening of the amount that could be recovered.  First, the injured party's subsequent medical costs could be covered pursuant to a fee schedule set by a newly created Patients' Compensation Commission (PCC).
Second, a modest schedule of recoveries for a percentage of lost earnings, with a cap, could also be developed by the PCC.  Finally, a modest one-time payment schedule for certain specific injuries, such as the loss of the use of a limb, could also be developed by the PCC.
More than likely there would be no recoveries for pain and suffering or loss of consortium.  Also, instead of giving juries great latitude to set damages, as noted above, recoveries could be pre-set at reasonable amounts by the independent PCC.
B.  Other Nuances
A new no-fault system would also have to deal with situations when a worse outcome is actually probable.  While a worker does not expect to be injured when he or she goes to work, some medical procedures, for example some elective, experimental or end-of-life procedures, are undertaken even when a bad outcome is probable.
This issue could be addressed in a number of ways, including carving out such procedures from the new system by leaving such procedures covered by existing malpractice principles.  Similarly, some services, such as mental health services, as well as some injuries, such as allergic reactions, could also be carved out, and left covered by traditional negligence theories.
Although attorneys' fees are capped in the present workers' compensation system, to allow the passage of no-fault medical malpractice reform, attorneys representing injured patients should still be allowed to be paid a percentage of the amount recovered, albeit such recoveries, and, therefore, such attorneys' fees, would be lower.
C.  Implications and Further Study
A potential additional by-product of a no-fault system might be better patient safety, since such a system should move the medical industry's focus from fault to a focus on preventable injuries.
The creation of a Patients' Compensation Commission is also rooted in an easily understandable and accepted foundation.  The Hippocratic oath is not, "Do no negligence."  It is, "Do no harm."
Of course, the establishment of a Patients' Compensation Commission cannot be thought through during the hectic 90 days of the Maryland Legislative Session, but it could be fleshed out over a several month period.  If nothing else, perhaps such a no-fault proposal should be modeled to see if it is better or worse than the present system from an economic and social perspective.
Moreover, if further study indicates that a PCC has merit, then health care providers might some day buy injured patients compensation insurance, instead of malpractice insurance, and hopefully obtain that insurance at a much lower premium.