In 1999, the Office of the Inspector General (OIG) of the United States Department of Health and Human Services announced that "gainsharing" arrangements are generally against the law. Gainsharing is an arrangement in which a hospital pays physicians a share of hospital expense reductions attributable to a change in the physicians' use of hospital supplies, or other hospital resources.
In 2005, the OIG liberalized its view by issuing six separate opinions allowing gainsharing plans involving cardiac surgeons and cardiologists at certain undisclosed hospitals. The opinions state that, if the following ten conditions and limitations are met, then these hospitals may institute gainsharing plans without fear of prosecution under the Civil Monetary Penalty or Anti-Kickback laws. 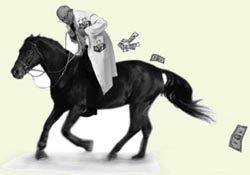 First, the hospitals must review their spending and recommend specific areas where the hospital believes cost savings can be realized without harming patients.
Second, a hospital may not pay more than 50% of the cost savings realized from implementing the recommendations to participating doctors. Payments should be made pursuant to a written agreement lasting no more than one year, with an aggregate payment made at the end of the year. (The OIG implied that multi-year agreements might be acceptable, if updated hospital costs were used to measure subsequent savings and if a lower percentage of the cost savings were passed on to the participating doctors in subsequent years. However, the OIG has not yet specifically approved a multi-year deal.)
Third, where appropriate, a "floor" should be instituted for savings realized from implementation of each recommendation. For instance, if savings could be realized from reducing the use of a specific item, and studies have indicated a best practice usage of that item in 5% of cases, no cost savings would be passed on for a reduction in use beyond 5%.
Fourth, while standardization in the use of products is an acceptable recommendation, the full range of products should still be available to physicians. Decisions should be made by each physician on a patient-by-patient basis.
Fifth, if the number of procedures performed that are payable by a federal health care program exceed the number of such procedures performed in the previous year, no cost savings will be paid to the group for the additional procedures.
Sixth, the severity, age and payor of the patients seen by the participating physicians should be monitored. If these characteristics of a physician's patient mix change significantly, then that physician should be terminated from participation in the gainsharing program. This requirement addresses the concern that sicker patients might be steered to one hospital or another because one has a gainsharing program while another does not.
Seventh, the gainsharing arrangement should be disclosed to patients of the participating physicians. Ideally, such a disclosure should take place pre-admission. However, if pre-admission disclosure is impossible, disclosure should be made before surgery. These disclosures should be in writing.
Eighth, participation should be limited to physicians who are already on staff.
Ninth, the gainsharing agreement should be limited to a specific physician group, consisting of physicians with similar specialties. No cost savings should be shared with the physicians who refer to physicians in the group.
Tenth, steps should be taken to reduce the incentive for an individual surgeon to generate disproportional cost savings. In the OIG opinions, the proposed arrangements achieved this because each group distributed all of its profits on a per capita basis. Groups that do not distribute profits on a per capita basis should distribute amounts earned under a gainsharing agreement on a per capita basis.
Finally, the hospital and the participating group should document their activities and methodology under the gainsharing arrangement and should make such documentation available to the Department of Health and Human Services.
Importantly, the OIG opinions are limited only to the parties who requested them. A hospital could, however, institute a similar plan and submit it to the OIG for approval. If the plan follows the requirements outlined above, it is likely that the OIG would approve it. However, the scope of these OIG opinions is limited to the Civil Monetary Penalty and the Anti-Kickback statutes.
Other statutes, including the Stark law, could still render these arrangements illegal. More specifically, for gainsharing arrangements to comply with the Stark law, payments made to participating doctors must be set at fair market value.
Accordingly, in addition to obtaining OIG approval before initiating a gainsharing arrangement, it would be prudent for a hospital to obtain an independent opinion from an accounting or consulting firm that the anticipated payments to participating doctors would be at fair market value in light of the doctors' involvement in the program. In this regard, additional safeguards might be appropriate that limit the total pay-out to each doctor. Ironically, greater savings will result in greater pay-outs to doctors and more Stark risk, while lower savings will result in lower pay-outs and less Stark risk.