The ABCs of Phase III of Stark II

The "good" news is that new federal regulations allow hospitals to pay for annual medical staff parties. However, those same new regulations also sharpen the government's aim at other behavior involving doctors and entities, such as hospitals, that provide designated health services (DHS).
More specifically, the Centers for Medicare and Medicaid Services (CMS) has promulgated new Stark II, Phase III regulations, effective December 4, 2007, that impact how the federal Stark law is interpreted.
The Stark law prohibits a physician from referring patients to receive DHS, such as hospital services or diagnostic tests, that are paid for by Medicare or Medicaid, from an entity with which the referring physician has a financial relationship, unless a specific exception applies.
The Phase III regulations attempt to balance the delivery of efficient health care against both the potential danger of overutilization of services, as well as the unnecessary demonization of trivial financial relationships. In this context, the new regulations liberalize the Stark law in a few "innocuous" or beneficial instances, but for the most part the new regulations tighten Stark's grip on perceived "abusive" behavior. 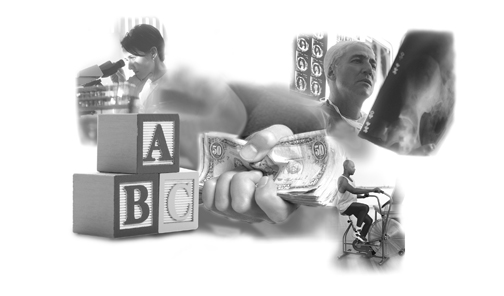 A. Liberalizing Rules
Phase III liberalizes the rules in the following circumstances.
1. Hospital Recruitment Incentives. Under the previous regulations, hospitals could provide incentives to physicians to relocate and to join existing groups that already practice at an underserved hospital. However, those group practices could not impose non-competition clauses on the newly recruited physician. Now, such groups may place "reasonable" restrictions on recruited physicians. For example, a limited non-solicitation of the group's patients would be a reasonable restriction.
Rural hospitals have been permitted to pay doctors to relocate to their areas. Now, rural health clinics may also provide recruitment incentives under Phase III.
The old rules allowed underserved hospitals to reimburse existing group practices for incremental costs associated with new recruits, but those old rules were silent about existing overhead created by a departing physician. Now, both rural hospitals and rural health clinics may compensate a group practice for either the additional incremental cost of the newly recruited physician or the lower of either the per capita overhead allocation for the departed doctor or 20% of the group practice's costs.
To qualify for the Stark recruitment exception, recruited doctors have to relocate their practice at least 25 miles, and 75% of the patients they treat must be patients not previously treated by the recruited doctor. However, full time physician employees of the Department of Defense, Department of Veterans Affairs, Indian Health Service, or State or Federal Bureau of Prisons no longer need to satisfy these thresholds.
2. Annual Medical Staff Party. Medical centers, hospitals, and other DHS entities with medical staffs may now host one annual medical staff party each year without violating the Stark law, regardless of the cost of that party. Previously, such parties were subject to an inflation adjusted monetary cap for non-monetary contributions, which cap is $338 per doctor in 2008. Gifts given to physicians at the party are still subject to the cap.
3. Incident to Services. Physicians in a group practice may be paid productivity bonuses based on the number of procedures they personally perform. Phase III states that an employed physician's productivity bonuses may also be based on supplies (such as drugs) on other services (such as physical therapy) that are provided "incident to" a physician's personally performed services, provided that those services comply with Medicare billing rules for "incident to" services.
4. One Year Term. The Stark regulations require that office and equipment leases have a term of at least one year. Under Phase III, CMS explained that parties can amend those leases during the first year, provided that the rental charges or other terms material to the rental charges are not changed.
B. Stricter Rules
The Phase III regulations are more restrictive regarding the following financial relationships between physicians and DHS entities.
1. "Stand in the Shoes". The Phase III regulations introduce a new "stand in the shoes"
concept to analyze indirect physician-DHS entity relationships.
A physician in a "physician organization" will "stand in the shoes" of that organization for purposes of analyzing the financial arrangements between that organization and a DHS entity. As a result, the physician organization is disregarded and the physician will be deemed to have a direct relationship with the DHS entity. This change in analysis could result in a previously acceptable relationship becoming unacceptable.
A "physician organization" includes solo practitioners in professional corporations, multiple physician group practices, and hospital affiliated practices and faculties. However, CMS realized that this new "stand in the shoes" rule might unintentionally prohibit beneficial relationships involving doctors employed by academic medical centers or tax-exempt health systems. As a result, CMS agreed to suspend the "stand in the shoes" requirement for those entities until January 1, 2009.
2. Independent Contractors. Group practices may only bill and collect for independent contractors as physicians "in the group practice," if the independent contractor physician directly contracts with the group practice, and the independently contracted services are performed "in the group practice's" facilities. Independent contractor agreements between two group practices would no longer satisfy this requirement.
3. Office and Equipment Leases. CMS tightened its interpretation of the office and equipment lease exceptions with regard to block leases and common areas. The Preamble to the Phase III regulations state that office and equipment leases must be block leases that grant the physician the exclusive use of part of the office for a defined period of time. Furthermore, although "common areas" in a lease may be shared, CMS views examination rooms and rooms containing leased equipment as rooms requiring an exclusive block lease.
4. Fair Market Value. Previously, CMS created a safe harbor for certain arrangements that used one of several fair market valuation guides. In Phase III, CMS eliminated this safe harbor, and stated in the Phase III Preamble that fair market value ultimately depends upon a multitude of factors including the nature of the transaction, the geographic location of the arrangement, and the accuracy of the valuation itself.
5. Hand-Delivery of Durable Medical Equipment. The Phase III Preamble makes it clear that physicians who hand-deliver durable medical equipment (DME) are not exempt from the Stark law.
C. Conclusion