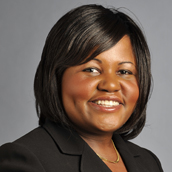 Gordon Feinblatt, LLC is pleased to announce that Alicia Lynn Wilson has been elected as a Member of the Firm.
Ms. Wilson is a member of the Labor & Employment and Litigation Practice Groups and is Chair of the Firm's Diversity Committee. Ms. Wilson represents clients in state and federal claims involving race, age, disability, gender and sexual orientation discrimination, as well as sexual harassment, retaliation, wrongful discharge, and wage and hour issues.
Ms. Wilson is active in the Baltimore and legal communities, and has been the recipient of numerous honors and awards, including:
2015 Community and Public Service Award – Young Lawyer of the Year from the Maryland State Bar Association's Young Lawyers Section
2015 Young Lawyer/Future History Maker Award from the Monumental City Bar Association
2015 Rising Star award by the National Summit of Black Women Lawyers
2015-17 member of the Diverse Leaders Academy Program for the American Bar Association's Section of Litigation
2010-2015 Maryland Super Lawyers Magazine's lists of "Maryland Rising Stars" for civil litigation defense
2014 Hot List in Lawyers of Color Magazine
Ms. Wilson is a member of the Executive Board of CollegeBound Foundation, Vice-Chair of the Executive Board of the Public Justice Center, and a member of the CHOICE Jobs Program Advisory Board, as well as supports various other not-for-profit organizations in Baltimore.
Prior to joining Gordon Feinblatt, Ms. Wilson clerked for the Honorable David W. Young (ret.) of the Circuit Court for Baltimore City. She received her J.D. from the University of Maryland School of Law and her B.A. from University of Maryland, Baltimore County.